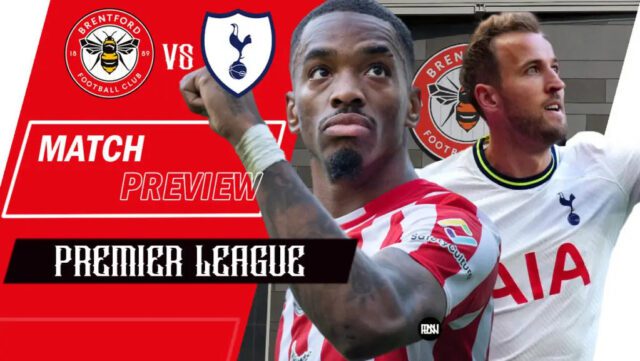 Brentford host a promising Tottenham Hotspur side this boxing day as the Premier League returns to action following a vivacious World Cup. With both sides having won each of their last league outings, either manager will be keen on continuing to build on their winning momentum moving forward.

Having registered a compelling victory against Manchester City in their previous league outing, Brentford will be looking to continue their winning momentum moving into the second half of the season. With Thomas Frank’s side unbeaten in three league games heading into the fixture, the Bees will be keen on delivering a competitive performance as they aim to move up the league table over the busy period of fixtures.

On the other hand, sitting just three points above fifth-placed Manchester United, Antonio Conte’s Spurs will be looking to improve their consistency in results moving forward. Having registered only two victories in their last five league outings the North-London club will be keen on nothing but three points on boxing day as they look to solidify their position in the top four over the coming weeks.

Aaron Hickey, Thomas Strakosha, and Kristoffer Ajer remain on the sidelines as they continue to recover from injury although Pontus Jansson is available for selection having recovered from a hamstring injury sustained in October. Frank is expected to field the same starting line-up that saw them secure a victory against City last time out, with Ivan Toney expected to feature despite facing charges from the Football Association over alleged breaches of their betting rules.

Fraser Forster is expected to feature between the sticks against Brentford with Conte confirming Hugo Lloris’ participation on the bench on boxing day. Richarlison and Rodrigo Bentancur remain out of contention due to injuries while Ryan Sessegnon emerges as a doubt for the fixture. Cristian Romero remains unavailable with the player yet to return owing to ongoing World Cup celebrations with Argentina while Ivan Perisic could make start at left-wing-back against Brentford.

With both teams expected to deliver a competitive display throughout the game, Monday’s boxing day fixture at the Brentford is likely to produce a mouth-watering match-up on the pitch. Having secured a number of notable results hitherto, the hosts will be keen on making the best of their home advantage while Spurs will be looking to secure a compelling result.

Expected to rely on their full-backs and midfield in a bid to progress the ball up the pitch, Brentford are expected to retain the bulk of possession; aiming for an early breakthrough against Spurs. With the team expected to face a competitive mid-block, the Bees will look to exploit the spaces down the flanks alongside being compact in defending the half-spaces in the central areas of the pitch. Moreover, with set-pieces likely to offer the hosts opportunities in front of goal, the Bees will be keen on striking first on boxing day.

On the other hand, having conceded in each of their last seven league outings, Spurs will be keen on a change in approach on Monday. Likely to employ a compact midfield aiming to make use of possession higher up the pitch, Conte’s side will be looking to exploit spaces across the attacking third utilising intricate passing against Brentford. Additionally, boasting commendable potential across the flanks, Spurs will be keen on overloading either wing on boxing day in a bid to create space for their attackers in the central areas of the pitch.

Having netted a brace in his last league outing, Toney is expected to build on his promising performances moving forward. Boasting disrupting movement and ability on set pieces alongside serving as a robust number nine, the striker is likely to test Spurs’ defensive resolve on boxing day. Additionally, with the team reliant on his overall contribution, Toney will be keen on making a difference against Spurs.

Fresh off a promising World Cup campaign, Harry Kane is expected to trouble the Brentford backline on boxing day. Boasting immense potential off-the-ball alongside serving as a creator operating in the central areas of the pitch, the striker is likely to test the Bees’ defensive transitions whilst occupying their centre-backs on the pitch.