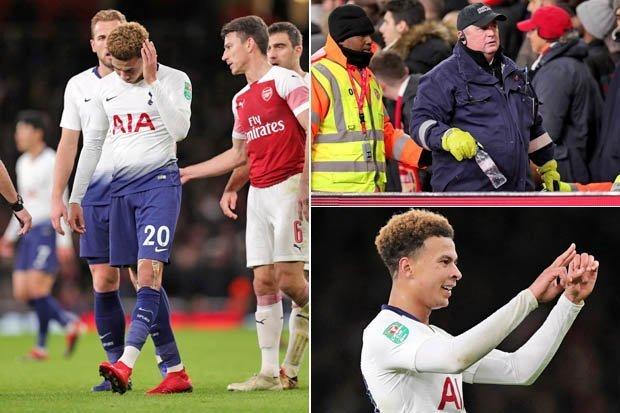 Delle Ali has made the headlines for him impressive performance in the North London derby which saw him score a goal and provide an assist to book his teams place in the EFL Semi-finals where they face Chelsea.

During the match the England International was hit with a bottle in the 73rd minute. Police are investigating the incident.

“Anyone identified will receive a lengthy club ban and their details will be passed to the police to commence legal proceedings,” said the club.

“We have all been embarrassed by the individual who threw a bottle at Dele Alli,” Arsenal added in a statement.

“Behaviour of this type has no place at Emirates Stadium and after analysing CCTV footage, which showed him leaving the stadium after throwing the bottle, we have identified an image of the suspect.

“We are liaising with the Metropolitan Police and investigations continue in order to apprehend the culprit.”

The Football Association is aware of the incident and will support the police and clubs as they look into the matter.

Alli will face no action for responding with a 2-0 gesture to fans – referencing the scoreline.