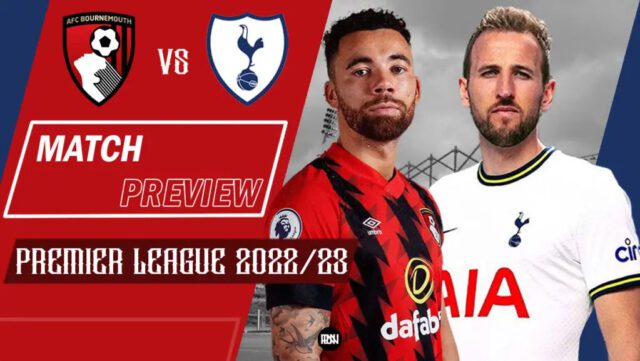 The 14th gameweek of the Premier League season will be played out this weekend, as we enter a final couple of weeks before club football takes a break for the FIFA World Cup in Qatar. This weekend sees AFC Bournemouth welcome Tottenham Hotspur at home.

Bournemouth were last in action against West Ham United in London, as they suffered a 2-0 defeat away from home. It was their second loss in a row after a brilliant unbeaten run of six games stretching back to the start of September. However, their game against Southampton last weekend saw the end of that run as they lost 1-0 after a valiant effort. That loss was interim manager Gary O’Neil’s first loss since he took over the charge and steadied a ship that seemed to be sinking.

However, now the Cherries are on a two-game losing streak as they went through a torrid time in the capital last weekend. The loss came not just in terms of points but also in terms of personnel as the Cherries lost a couple players to injuries that night. It will be a big blow to O’Neil who looked to have finally gotten a settled and regular first XI, and he will have to cope without goalkeeper Neto and striker Dominic Solanke. The run of two defeats means the hosts on Saturday now sit in 14th place, just 4 points off the relegation zone.

Tottenham Hotspur have had a similar form in their last two games as their next opponents. They were dominated by Manchester United at Old Trafford in a 2-0 loss and were then handed another loss at home against Newcastle United last weekend. They played better against the Magpies than they did against Man United and were kept out in the first half solely due to some inspired goalkeeping from Nick Pope in the Newcastle goal. An error in judgement by Hugo Lloris then allowed the visitors to sneak into the lead after which Miguel Almiron capitalized on some high pressing to slot the ball calmly past Lloris to double their lead. Spurs tried very hard to catch up to the Tyneside club, but could only manage one goal back through Harry Kane. It was the first time since February that Spurs had lost two games in a row in the league. They lost three on the trot on that occasion, and Antonio Conte will be eager to avoid a similar fate this time around.

The North Londoners played in the midweek UCL group stage game against Sporting Lisbon at home as they squandered an opportunity to confirm their place in the next round by drawing to the Portuguese side 1-1. The home side were by far the second-best team in the first half as former Spurs man Marcus Edwards put the visitors up 1-0, twenty-two minutes into the game. Rodrigo Bentancur then equalized around the 80th minute mark, after they came close a couple of times prior. Harry Kane had a late goal ruled out by a lengthy VAR check for offside as the home fans were dismayed after they thought they had sneaked away with all three points.

Bournemouth’s loss against West Ham United saw two of their most important players go off with injuries as striker Dominic Solanke went off as he suffered an ankle injury while taking a shot on goal during a counterattack in the first half. Goalkeeper Neto also injured his hamstring while taking a long goal kick although he was able to continue till half-time. The second half started with backup goalkeeper Mark Travers replacing Neto, his first appearance since that fateful day at Anfield when they lost 9-0 to Liverpool.  Adam Smith also seemed to pick up a knock, but he was able to continue and it remains to see if he is available for selection on Saturday. Neto and Solanke are expected to miss out along with David Brooks and Llyod Kelly.

Tottenham Hotspur will be without Dejan Kulusevski with the Swedish forward feared to be out of action till the World Cup with a hamstring injury. Cristian Romero and Pierre-Emilie Hojbjerg returned to the squad for the UCL game on Wednesday after recovering from their niggles, as Bryan Gil returned to the fold and produced a phenomenal performance from the bench. It remains to see if Conte starts the young Spaniard, in the absence of two of his main attackers, after previous reports that the 21-year-old had fallen out of favour with the Italian coach.

An often underrated player, Christie is an integral part of the Bournemouth team. The Cherries look better with him in the side and the Scottish international has the ability to make things happen. The winger has started most games for the Cherries and is an almost guaranteed starter now. He has not had the best of seasons so far, with just 1 goal in 12 games, but his efforts in every game have made sure that it is hard to drop the Scot from the team. The Bournemouth team lacks creativity, and with Christie in the side, they look a far better team in attack than without him. Spurs have a very organized defense, and despite their form over the past few games, they will be firm favorites against a weak Bournemouth team. The Cherries will need Christie to be on his best form to get a positive result on Saturday.

Cometh the hour, cometh the man – Harry Kane has been a force to be reckoned with in world football for almost a decade. The English center-forward almost forged a comeback against Newcastle on Sunday as he pulled a goal back. He hardly put a foot wrong against Eddie Howe’s men and was unplayable – a pattern evident for years. But his efforts were not enough to spare Tottenham the blushes. However, Kane doesn’t shy away from the big stage but has received little support from his teammates. With Son having a slow start to the season and Kulusevski out injured, the Tottenham faithful will hope that their star man can keep them afloat in the top 4 of the Premier League.